Methodology[ edit ] The report is above all, a benchmark study of regulation. The survey consists of a questionnaire designed by the Doing Business team with the assistance of academic advisers. The questionnaire centers on a simple business case that ensures comparability across economies and over time.

If President Joko "Jokowi" Widodo wants to see Indonesia join the top 40 countries in the World Bank's Ease of Doing Business ranking under his watch, he should make sure he wins re-election next year.

Indonesia slipped one place to 73rd, behind Greece, the Ukraine and Kyrgyzstan, in the Ease of Doing Business report, released late on Wednesday. The president has set a target for the country to be in the top 40 by next year, but his second term will be decided in April, while the next report would not be out until next November.

Indonesia, for one, issued new rules that make starting a business, registering property and obtaining credit, easier for businesses and make it cheaper for them to get electricity.

These bottlenecks allow economies like China, Kenya and Kyrgyzstan to overtake Indonesia. China made a leap to 46th place in this year's report, from 78th last year. Still, the report highlights Indonesia's success in reforming its judiciary system and making the country a case study for others to emulate.Over the past four years, when Indonesia was under the leadership of Indonesian President Joko Widodo, Indonesia climbed in the World Bank's Doing Business ranking from number in , to number in , 91st in , to .

Other countries, besides Indonesia, that made a strong jump in the edition of the World Bank's Ease of Doing Business index are Bahrain, Belarus, Brunei Darussalam, Georgia, Kazakhstan, Kenya, Pakistan, Serbia and United Arab Emirates.

In Doing Business , the team expanded the sample of cities in large economies, defined as those with a population of more than million as of Bangladesh, Brazil, China, India, Indonesia, Japan, Mexico, Nigeria, Pakistan, the Russian Federation and the United States. For each of these economies the sample now includes the . 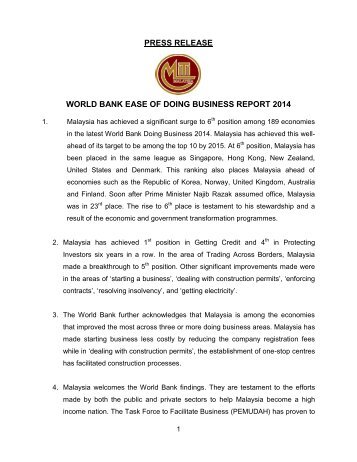 These reforms are tracked – and inspired – by the World Bank Group’s Doing Business Index ranking countries on the ease of doing business within their borders. “Governments have the enormous task of fostering an environment where entrepreneurs and small and medium enterprises can thrive,” said World Bank Group President Jim Yong Kim.

The ease of doing business index is an index created by Simeon Djankov at the World Bank Group. The academic research for the report was done jointly with professors Oliver Hart and Andrei Shleifer. Higher rankings (a low numerical value) indicate better, usually simpler, regulations for businesses and stronger protections of property rights.

Doing Business Doing Business Reforming to Create Jobs, a World Bank Group flagship publication, is the 15th in a series of annual reports measuring the regulations that enhance business activity and those that constrain it.